CIPTEC, as part of the CIVITAS knowledge generating research projects family, participated actively in multiple ways in the last CIVITAS FORUM Conference, held on 28-30 September in Gdynia, under the theme “SHAPING THE MOBILITY OF TOMORROW”. Hundreds of CIVITAS stakeholders, from cities, consultancies, industry and research sector, from all around Europe, were gathered in Gdynia for three days.

Prof. Aristotelis Naniopoulos delivered a technical presentation on 29th of September at the plenary session of the Conference entitle ‘Participation: involving citizens, stakeholders and experts’ and participated at the round table discussion of the speakers of that session. The presentation has the title “The CIPTEC project concept and findings concerning market trends, users’ and stakeholders’ needs and invitations ranking” and is available from here. It is describing in brief the CIPTEC project’s concept, its main findings after the completion of the 1st year of its implementation, and the ongoing project activities related to the co-creation workshops and the crowdsourcing campaigns at local and European level (http://youplan.ciptec.eu).

CIPTEC was presented also by Prof. Aristotelis Naniopoulos during the workshop entitled ‘European Innovation Partnership on Smart Cities and Communities’ that was held on 29th of September in the frame of the CIVITAS Forum. Among the purposes of the workshop was also the discussion on the opportunities and potential for upscaling, transfer, replication and market take-up of the activities of the ongoing CIVITAS family projects. 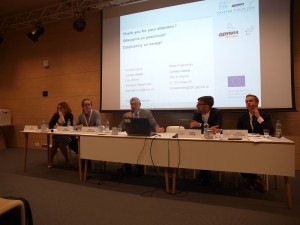 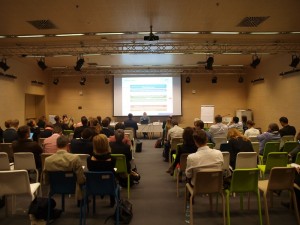 On 28th of September, the annual CIVITAS Project Coordinators meeting, under the organisation of SATELLITE project, was held and three parallel sessions were realised focusing on the (i) coordination, (ii) evaluation and (iii) dissemination issues. Brief presentations of the project and the relevant issues were delivered in all three sessions by Prof. Aristotelis Naniopoulos (from AUTh), Mr. Evangelos Genitsaris (from AUTh) and Mr. Ilias Trochidis (from Tero), respectively.

CIPTEC dissemination stand was set by the project coordinator, Aristotle University of Thessaloniki, at the exhibition area, during the whole duration of the FORUM for the promotion of the project. 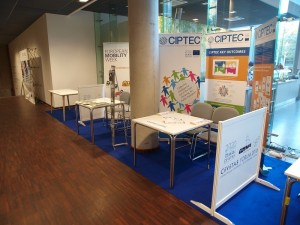 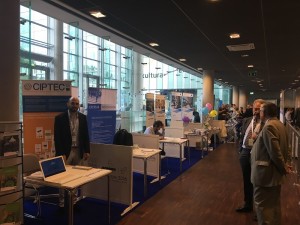 CIPTEC brochures and posters were distributed to the visitors, while the roll-up banners and the CIPTEC’s playing videos stimulated some chatting, informal discussions and an interview to a Portuguese journalist concerning the future of the Public Transport sector. In addition, contacts with representatives of several bodies, mainly coming from the CIVITAS projects consortia were established, investigating the opportunities for synergies.

CIVITAS community renewed its meeting in Torres Vedras of Portugal for the next CIVITAS FORUM of 2017.