On March 6, 2017 a fruitful networking meeting was realised in Copenhagen between CIPTEC project and the representatives of Public Transport Council (PTC) of Singapore.

In the meeting, CIPTEC was represented by Mrs. Hafieda El Aissati from MRDH, while PTC was represented by Mr. Richard Magnus, Chairman (PTC), Mr. Alvin Chia, Chief Executive (PTC), Ms. HENG Ju-Li, Director of Research & Advisory (PTC) and Ms. Candice YEO, Benchmarking & Advisory (PTC). PTC expressed its interest about CIPTEC project and the collective intelligence activities (particularly, co-creation activities and crowdsourcing campaigns) towards the generation of innovation for the Public Transport in European cities that have been implemented within it.

The possibility of transferring the knowledge developed in the frame of CIPTEC was explored, particularly with regards to the creation of a structure and a methodological approach on how PTC can work towards involving key stakeholders, i.e. PTOs and commuters, identifying mobility problems and encouraging the co-creation of solutions. 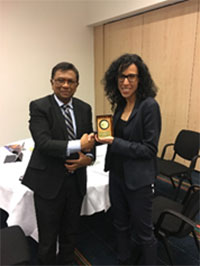